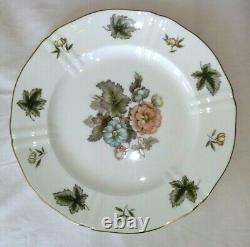 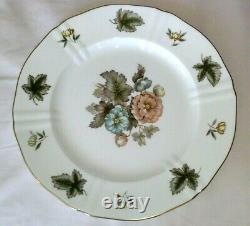 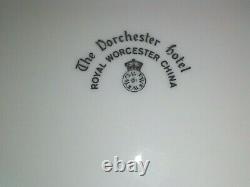 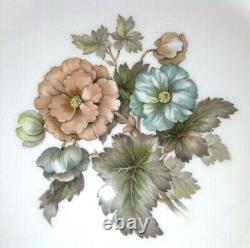 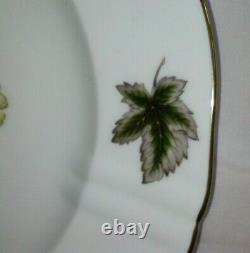 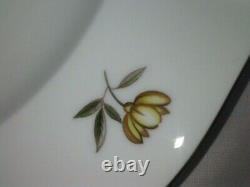 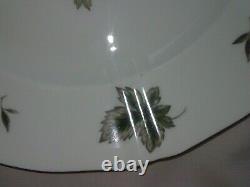 One dozen (12) DINNER PLATES. These plates are rare: c 1958. All pieces were imported by me, directly from Royal Worcester, England. Please feel free to contact me if you have any questions. Century traditional skills were maintained and developed at Royal Worcester and bespoke dinner and tea services and ornamental items of the highest quality were made for individual customers including HM Queen Elizabeth II, King Farouk, The King of Siam, Queen Wilhelmina, Ranjitsinji, and The Bayan Palace, Kuwait.

Royal Worcester also continued to produce porcelain and bone china for hotels and institutions such as Claridges, The Dorchester , The Savoy, The Ritz, Raffles (Singapore), The Ford Motor Company, The Houses of Parliament, BBC, Aspreys, Garrards and Tiffanys (New York). From the moment the famous doors of The Dorchester first opened back in 1931, in London, it has attracted high-profile guests and those with a taste for the finer things in life. The Worcester Royal Porcelain Co Ltd was formed in 1862.

Over the years factory marking of pieces has evolved and although marks vary from impressed and hand written to printed emblems, the majority of bone china produced was marked in the way described below. The standard printed factory mark, included the number 51 in the centre that refers to the year 1751 when the Worcester Porcelain Company was founded by Dr John Wall. The mark can appear in any colour, and on a variety of materials.

Three circles and three dots and Made in England. This continued until 1941 when there were 9 dots and the triple circle mark.

Between 1942 and 1948 no date code was used in the mark. The letter V was introduced, ENGLAND added. The letter W (with three dots). The letter W or R in a circle (with six dots).

This series of codes continued until the 1960s when the dots are arranged around the R (signifying registered) in a circle. From 1966 the date coding system was rarely used and from the mid 1960s, a different format of factory stamp was also adopted for bone china tableware. The date included is the year of introduction of the design, not the date of manufacture.

In April 1988 a system of year of manufacture identification that fitted with that used by Spode was introduced and an M within a diamond was incorporated below the factory mark. In January 1989 new factory stamps were used with an N in a diamond under the mark. Soon afterward black numbers were introduced to identify the lithographer. These numbers were replaced with grey ones in August to reduce their visual impact.

In 1990 all factory stamps reverted to the R in a circle under the mark. A printed grey lithographer identification number (eg 39) was used, plus a suffix to signify the year of manufacture. In the 1980s and 1990s some ranges of decorative pieces such as collectors plates and figurines were printed with very elaborate marks that include designers names, issue numbers and series names. A huge variety of marks were used and most are self explanatory.

Other materials Since the 1880s separate systems of marks have been used for items made of earthenware (crownware) and Royal Worcester Vitreous. These sometimes follow the same dot code system, but hard porcelain rarely has any code and is therefore much more difficult to identify. The item "Royal Worcester THE DORCHESTER HOTEL Set 12 DINNER PLATES WORCESTERSHIRE ENGLAND" is in sale since Tuesday, August 6, 2019. This item is in the category "Pottery & Glass\Pottery & China\China & Dinnerware\Copeland". The seller is "royal-english-china" and is located in Tustin, California.