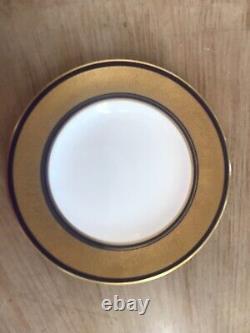 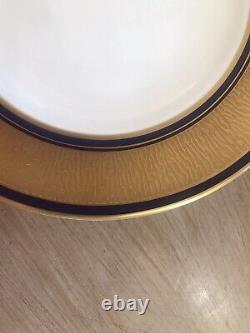 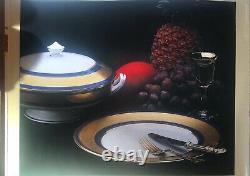 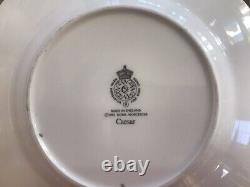 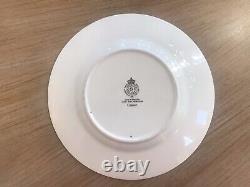 2 oval platters, 13 inches. 1 soup tureen base and. 1 cover for soup tureen. 1 covered vegetable dish base and.

1 lid for covered vegetable dish. 1 underplate for gravy boat (no gravy boat included, this is just the underplate which can be used for other things). 2 large sugar bowls (no lids, just the bowls). All pieces stored New, Never Used. Priced low for quick sale. If you are interested in one or more of these items, please let me know and I will be happy to make a special listing. The Worcester Royal Porcelain Co Ltd was formed in 1862. Over the years factory marking of pieces has evolved and although marks vary from impressed and hand written to printed emblems, the majority of bone china produced was marked in the way described below. The standard printed factory mark, included the number 51 in the centre that refers to the year 1751 when the Worcester Porcelain Company was founded by Dr John Wall.

The mark can appear in any colour, and on a variety of materials. The marks almost always included a code to indicate the year of manufacture.

(with three dots)1954 =the letter W.. (with four dots)1955 =the letter W... (with five dots)1956 =the letter W or R in a circle.. This series of codes continued until the 1960s when the dots are arranged around the R (signifying registered) in a circle. From 1966 the date coding system was rarely used and from the mid 1960s, a different format of factory stamp was also adopted for bone china tableware.

The date included is the year of introduction of the design, not the date of manufacture. In April 1988 a system of year of manufacture identification that fitted with that used by Spode was introduced and an M within a diamond was incorporated below the factory mark. In January 1989 new factory stamps were used with an N in a diamond under the mark. Soon afterward black numbers were introduced to identify the lithographer.

These numbers were replaced with grey ones in August to reduce their visual impact. In 1990 all factory stamps reverted to the R in a circle under the mark. A printed grey lithographer identification number (eg 39) was used, plus a suffix to signify the year of manufacture.

A huge variety of marks were used and most are self explanatory. Other materials - Since the 1880s separate systems of marks have been used for items made of earthenware (crownware) and Royal Worcester Vitreous. These sometimes follow the same dot code system, but hard porcelain rarely has any code and is therefore much more difficult to identify. We have a lot of china - takes time to take pictures of it all! This item is in the category "Pottery & Glass\Decorative Cookware, Dinnerware & Serveware\Plates".

The seller is "royal-english-china" and is located in this country: US. This item can be shipped to United States.